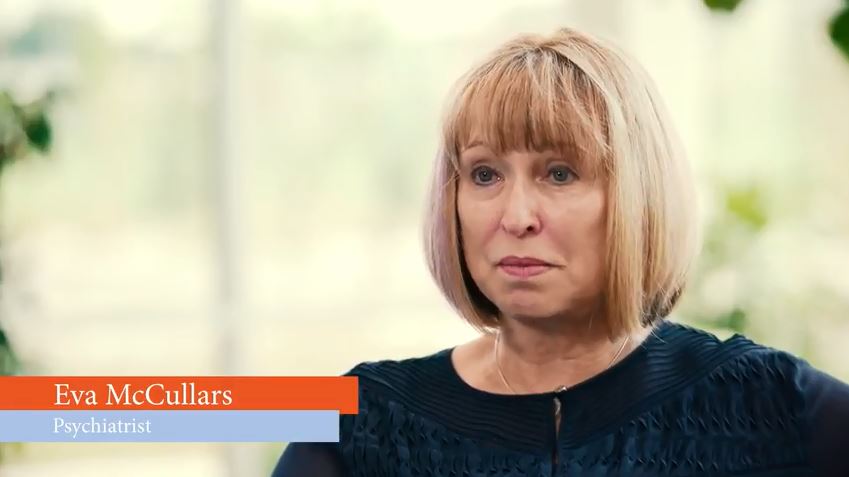 For as long as Dr. Eva McCullars can remember, she always wanted to be a physician, just like her mom. As a child, she helped her pediatrician mother with patients, answering the phone when her mom was out treating patients on house calls. Her father is also a physician, a surgeon, so Dr. McCullars says, I was the only child, and I grew up in medicine, so I think it’s in my genes.”

When her family moved to the U.S. from Prague, Dr. McCullars pursued her medical degree, first considering pediatrics, but deciding against that particular specialty during residency. She found her calling in psychiatry after taking a psychiatry program and loving it.

“Even though you have the same diagnoses for different people, everyone’s different,” she explains. “Everybody’s their own person. I was always an artist growing up, and to me, psychiatry’s an art because you have to combine the people’s personalities and their histories with medication, if that’s appropriate, or with a type of therapy or other interventions. Not a single person is alike.”

While working in Yuma, Arizona, at a sub-acute hospital, she ran into physicians working locum tenens, which exposed her to the idea of trying locums at some point. She gave it serious consideration later when, while working at a permanent position at a big hospital, she became dissatisfied with the way things were being run.

“It was all about the bottom-line, and patients weren’t getting good care [because of it],” Dr. McCullars explains.

So she considered moving into private practice. At the same time, her family in Oregon needed help. “The two situations came together where I was starting to be dissatisfied with my permanent job and needing to respond to my family in crises,” she says. “I thought, I can go to Oregon and work. That’s how the process [to full-time locum tenens] started.”

After making the move, the big revelation for Dr. McCullars was discovering that locum tenens provides her with a better way to practice medicine than full-time permanent positions. She feels that with locums, she is better able to make a difference to patients, use her time effectively, and share her gifts.

Why does Dr. McCullars like working locum tenens? “I like the freedom,” Dr. McCullars explains. She says that with locum tenens, she gets to make a comfortable income while going to places she has always wanted to explore. “I wouldn’t go back to a full-time permanent position,” she adds.

Dr. McCullars points out some additional benefits of locum tenens. She says you can:

Dr. McCullars’ advice for physicians coming out of residency

To younger doctors, she says, “It’s really hard to come out of training and make an instantaneous commitment to an area and to a facility. I think you should leave your options open‚Ä¶Definitely become a locums before you settle.”

Dr. McCullars’ advice to other physicians

To all physicians considering locum tenens, she says, “You have nothing to be afraid of… you have lots of support along the way. The benefits: being on your own time, being able to work four days a week instead of five days a week, not doing weekends, not doing call, being able to finish an assignment and leave without worrying about the patients… That’s one of the problems of long-term jobs and private practice is you take it home with you… You don’t have to do that as a locum tenens.”

Ready to explore your own locum tenens adventure? Browse our current openings or give us a call at 1.800.760.3174.